Patch 9.2 is here and brings with it a new raid, new Mythic+ content and a new daily quest zone. 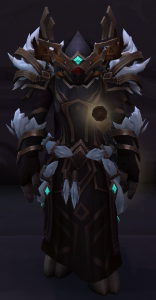 This is a very strong bonus, with the 2pc adding a lot of healing and the 4pc adding a significant amount of Tree of Life uptime (more than double what you’d get without it). Tree of Life as a talent will remain ok, but expect Soul of the Forest to become the new default talent.

In Mythic+ it’s not quite as strong. The 2pc will still add a lot of healing, and the extra mastery stack will provide even more. Mythic+ is a damage-focused environment but free healing is free healing. The 4pc is a little rougher, Tree isn’t of much benefit in a small group environment and the procs are unlikely to be of much value.

You’ll have already been casting a lot of Swiftmend, but now it’s a part of your core rotation. You’ll aim to cast Swiftmend three times a minute, lining up your 9 second Tree of Life proc with Convoke the Spirits. This is a ridiculous amount of healing every single minute. You’ll otherwise mostly play as you have been already.

Weakauras to help you manage

Our 2pc tier set adds extra value to free rejuvs and so the dominant raiding combination is Celestial Spirits and Vision of Unending Growth. The alternatives are almost universally weaker though for very small raid sizes you could swap in Memory of the Mother Tree instead. In Mythic+ you will combine your covenant legendary with Draught of Deep Focus (for DPS) most of the time. 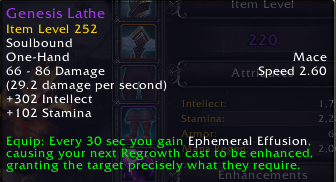 Here are the possible effects:

The weapon trades secondaries for a bit of an odd effect. Given Regrowth is a strong spell for us, we’ll naturally proc this frequently enough for it to justify it’s place against equal item level weapons but it falls behind if there’s a gap. As always you can confirm with your specific character in QE Live.

It’s unfortunate that we ended up with a somewhat dinky effect as our endgame healer weapon but it’s usable for Resto Druid.