Your priority as a healer is to keep your party alive. Most failed keys are due to deaths from either player failure or simply becoming overwhelmed. You can’t save everyone as a healer, but you can make a serious impact. Keeping a DPS alive that’s soaking frontals can be a better choice than doing damage yourself. That being said, because of the way Mythic+ is designed, not all pulls will require a lot of healing – even on the highest keys. You might even find that more pulls than not require very few healing abilities at all. The result is that you’ll have plenty of time to press DPS keys in between your healing in order to speed up the key. This guide will teach you how to use your limited GCDs in order to maximize your damage in a key. The following guide was written by Theebok and edited by Voulk.

There are two competitive Mythic+ covenants: Necrolord and Kyrian. As a healer your covenant choice is less impactful than getting the covenant specific buff in dungeons so be prepared to flex to whatever your group needs if you’re running in a premade. While Night Fae is popular in lower keys, it sharply declines as the key level gets higher. It was recommended prior to 9.1.5 due to our inability to freely swap between covenants but the flexibility we’re now afforded lets us play a more DPS-focused covenant in Mythic+. Night Fae remains an ok choice for absolute beginners who might benefit from the easy and quick healing Convoke provides however you should aim to move to Necrolord (with Kyrian in second) as soon as you’ve picked up the basics. Playstyle is discussed further below, but let’s take a quick look at what our two front runners give us:

Kyrian draws a lot of power through buffing a key DPS in your group and thus scales with how skilled (and geared) your party is. It has a slightly awkward requirement in that it requires a non-kyrian melee DPS in your group. The melee part is important because we’ll be playing Mikanikos which deals damage and gives cooldown reduction around your Kyrian link based on the number of nearby mobs (Effusive Anima Accelerator). When combined with Deep Allegiance you have close to a 50% uptime on your empowered link. You’ll want a non-kyrian if possible since the stat Kindred Affinity gives you is based on the covenant of your partner which is Mastery for Kyrian and so offers no damage. In Season 4 I’d discourage Kyrian unless you really enjoy the playstyle.

Necrolord is a complex ability that requires smart play to maximize. We’ll be using the swarm legendary which has a split mechanic. This leads to Swarm becoming more of an upkeep buff and you’ll aim to create as many swarms as possible. A 5 stack swarm, for example, will have a 60% chance to split into two 4 stack swarms when it finishes. Due to this mechanic the more stacks your swarm gets the more it will potentially create. We’ll get into target priorities a little further down the page but there’s a weak aura that will do most of the heavy lifting here. It even takes into account flight time and swarm uptime on bosses for even more DPS.

I generally prefer Necrolord since it provides a lot of healing along with it’s DPS. It’s also somewhat less reliant on your group.

In addition to Unity, there are three competitive legendaries for Resto Druid in Mythic+ and two of them add DPS: Circle of Life and Death, Draught of Deep Focus (Necrolord only), and Verdant Infusion.

Slots aren’t of much consequence and the recommendations above are general purpose.

Circle of Life and Death is going to be our primary recommendation through this guide but competitive alternatives are noted below. While primarily a damage legendary, you do get a little bit of healing value here too due to how Swarm, Spring blossoms and Flourish function – particularly during burst damage. Circle of Life and Death allows us to press our higher damage buttons like Sunfire, Moonfire, Rake and Rip more often instead of having to fall back on lower damage fillers like Shred or Swipe (see the rotation section below for some exceptions). When combined with Necrolord this legendary can lead to some more complex swarm management because it’ll fade more quickly.

Verdant Infusion is our strongest healing focused legendary but this is often unnecessary and should only be played if you expect your tank to take more damage than usual, or if you’re having trouble with single target healing challenges like targeted boss mechanics. More often than not failed interrupts and the like will lead to instant death in higher keys which often leads to Verdant Infusion not contributing as much as you might hope. Feel free to use it when you are still learning the spec or learning how to heal Mythic+ in general, or if it allows your tank to make bigger pulls in an organized group.

Draught of Deep Focus is a single target focused legendary that increases your priority damage in exchange for slightly lower overall DPS which can be very valuable since priority damage is worth more in most cases than AoE damage. Draught can be extremely useful if a dungeon contains a lot of long single target encounters like a Tyrannical Theater of Pain. Conversely it loses value if there are 2 or more targets you need to prioritize. The current affix adds relic adds to all bosses which leads to a slightly lower evaluation than it would usually hold. Draught is dynamic and all abilities are individually tracked, so Rip and Rake for example could be on different mobs and still get the buffed value. Adding Rake to a second target would lower the value of both. Healing wise Draught doesn’t offer much with the increased rejuv healing really only holding value in pure single target or low pressure scenarios. A lot of Draughts power actually comes from Necrolord because the Swarm DoT bonus and Draughts DoT bonus are multiplicative.

All of the above are useful situationally, and while Circle will be the primary focus of this guide, legendary choice is still frequently debated.

Talents are reasonably straightforward and you can consider these fixed rather than flexible. Balance Affinity + Oath isn’t considered competitive at this time. Balance Affinity also gets worse quickly the more you need to heal. While Feral abilities are front loaded, high DPCT spells like bleeds, Balance is more backloaded and relies on spending a lot of time DPS’ing (though it should be noted that it’s also behind with 100% DPS uptime). 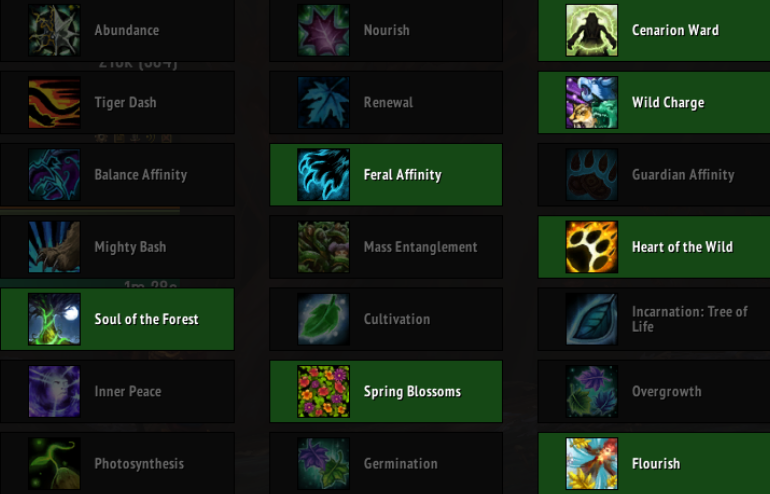 Picking a Soulbind and Conduits

Resto Druid is a very strong healer in 5 man content due to our ability to prehot the party before damage comes out. That allows us to prepare for dangerous moments – so long as we know it’s coming. We can also use that to our advantage to apply our healing before a pull even starts to open up more time to DPS. Given the Druid base kit is so strong for healing, we are able to gear around maximizing our damage in Mythic+ instead.

If you’re still learning the spec then use QE Live to determine your gear. It’ll build you a balanced set that combines damage and healing.

Once you’re more experienced you can join the DPS-focused meta and swap to Raidbots (Dungeon Slice) which will help you pick your best damage set.

The most effective stat for adding damage in a key is Haste which adds both damage (through faster hot / dot ticks) and lowers your global cooldown which lets you fit in more casts overall. This is even better when you consider you only need X GCDs to keep your most important HoTs on your party which means any GCDs added can all be focused on DPS. Crit and Vers are both of similar value though versatility also reduces damage taken which becomes particularly key as you climb to higher keys. Mastery is a very good healing stat, but is often dropped almost entirely as it adds no damage value.

Trinkets deserve particular note since they are an excellent way to add quite a bit of DPS with little effort – even if you spend a lot of the key healing. Since our healing is already so strong, many druids even wear double DPS trinkets – though if you are blasting damage then the stat trinkets can actually be very close.
S-Tier: Resonant Reservoir, Scars (Advanced)
Other competitive DPS trinkets: Deteriorated Construct Core, Satchel of Misbegotten Minions, Miniscule Mailemental
Good stat trinkets: So’leah’s Secret Technique, Hymnal
Raidbots will offer further advice on your specific trinket set.

Alright, you’re Necrolord, you’ve picked out your best gear set and conduits and now you need to know which buttons to press. The damage rotation for Resto Druid in Mythic+ is quite a bit more complex than most other healers and changes depending on the number of targets you’re up against. Resto Druid DPS is mostly based around our DoTs (fittingly) and this becomes even more prevalent with Swarm. We’ll discuss what to do during specific target counts below but some notes first:

This is the target count when Swipe becomes better than Moonfire. You rotation here on paper becomes straightforward: Sunfire -> Swipe. In practice though you don’t have infinite energy and will need to press Moonfire while you wait. You’re also likely to find that 8+ mob packs frequently destroy your party and you might spend a lot of them healing. It’s rather pointless to go into Cat Form for just one Swipe so you might be better off weaving Moonfire with Sunfire for these packs. You’re more likely to run the 4/5 target rotation instead unless it’s something like the Murloc pack in Gambit.

While Resto has a more complex rotation than other healers, it is still quite doable with practice. You won’t always have time to apply all DoTs, but knowing which ones to apply when can add a lot to your damage. Just pressing Moonfire on a single target can add 1k DPS alone, and pressing Sunfire in AoE packs can add 2k. While healing is still your #1 priority, you’ll find it is quite easy to add free damage. The most important takeaway is to always be doing something. While the recommendations above can be quite specific, the damage loss of making slightly a slightly suboptimal decision (like swiping on 3-4 targets) is much less than wasting a few GCDs deciding what to do.

You’ll notice Swarm isn’t mentioned too much because we’re actually going to use a weak aura to do all of the thinking for us. The above linked weak aura will highlight which target you should hit swarm on to maximize DPS. It’s incredibly good.

One response to “Advanced Catweaving”