This is part 2 of the trinket preview series. You can find part I here. We’ll discuss the second half of the dungeon trinkets, including a few that are only available from Mythic+ which means we won’t be able to get them for a few weeks. Dungeon trinkets are extremely varied this time around. As always, up to date trinket rankings will be available at full item levels on Questionably Epic Live when the expansion launches.

All calculations are on the 372 ilvl Mythic versions of the trinkets. This is the highest we’ll have access to for the first few weeks of the expansion. Some of the trinkets scale with your secondary stats and might vary slightly depending on your loadout but this doesn’t tend to be major. Blizzard tend to do a lot of trinket tuning in the leadup to release but I’ll keep note of any changes.

Our demo character (henceforth known as Kieran) has the following stats: 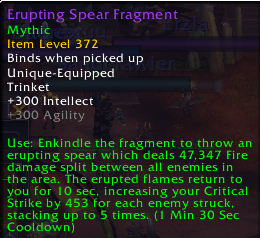 Very decent. We can fit a ton of boars in this thing. 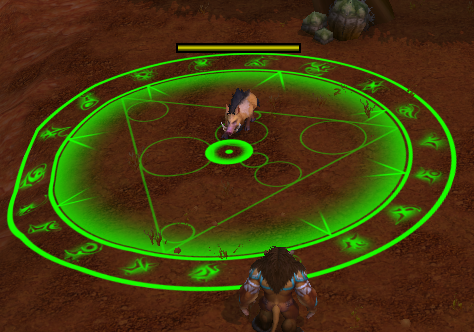 A fantastic choice on any fight with 4-5 targets to reliably hit. Unfortunately capped at a low item level in season 1 but it’ll be back later in the expansion. 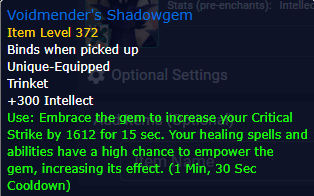 There’s only so much you can say about an on-use stat stick, but this is a great trinket and one of the best if you don’t intend on raiding. 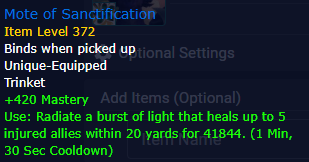 If they remains overtuned you’ll want to seek it out. Healing trinkets have been poor for quite a few years at this point and it remains to be seen if they’ll nerf this and continue the trend or leave it strong. 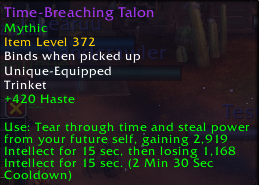 Verdict: Tear through time to grab a better trinket

Time-Breaching talon is one of the best in the market for amping a 3 minute cooldown. The problem is that you are much weaker outside of it since the trinket doesn’t have passive intellect, and also reduces your power for a bit. You’re better off grabbing an on-use trinket that has all of the above instead – even if it offers slightly less to your 3 minute cooldowns. 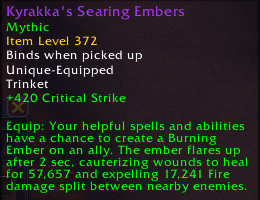 Verdict: Too little, too infrequently

Another janky HPS / DPS mix that needs further iteration or further tuning to see play. I think mixed trinkets are an interesting space to explore, but they run into some tuning difficulties because they need to tune it around having both, but in doing so the trinket because unusable in scenarios where adding damage is only a small boon to achieving your fight objective.

We’ll cover the rest in the next few days!