This is part 3 (out of 2) of the trinket preview series. You can find part I here and part 2 here. We’ll discuss the second half of the dungeon trinkets, focusing mostly on trinkets available in Mythic+. Dungeon trinkets are extremely varied this time around. As always, up to date trinket rankings will be available at full item levels on Questionably Epic Live.

All calculations are on the 372 ilvl Mythic versions of the trinkets. We’ll be able to get much higher than this from Mythic+ but trinkets tend to all scale at similar rates. Some of the trinkets scale with your secondary stats and might vary slightly depending on your loadout but this doesn’t tend to be that significant. There’s a high chance trinkets receive tuning in the lead up to release, but I’ll update the articles for any changes.

Our demo character (henceforth known as Matilda) has the following stats:

Flask of the Solemn Night 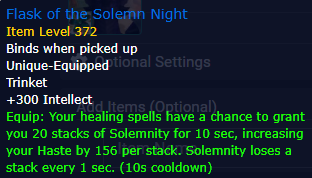 Verdict: Good on Paper but Difficult

Flask of the Solemn Night offers high average stats, but in a format that can be very difficult to take advantage of. You need to be a spec where you can both gain some benefit from a huge amount of haste, and can benefit from that haste at most times. Resto Druid and Mistweaver Monk are the only candidates that should find it very viable. It could be good for Disc Priest on paper but it’s likely to be too inconsistent to be better than other options. 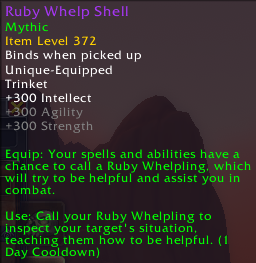 We’ll keep an eye on this trinket and update resources when we can collect more data on it. It appears to be too inconsistent to use since while the stat procs are nice, their proc rate gets pushed out by the weaker procs.

Verdict: Sounding the horn is decent value for some

The viability of Horn of Valor basically comes down to how well your spec pairs with a two minute cooldown. I’m not expecting this to see a ton of play overall – Paladin gets closest to getting value from it. 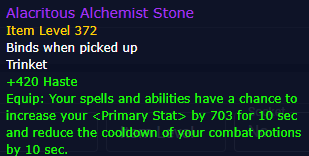 A stunning pre-raid option that gives you a full budget stat stick paired with a potion bonus that should easily buy you one extra cast per fight in the new raid. For any spec that is able to use Potion of Chilled Clarity well (Resto Druid, Preservation Evoker, Mistweaver Monk, Discipline Priest, some Paladin builds) this is a fantastic choice. That said, definitely compare it in full to other Spark options before you craft. 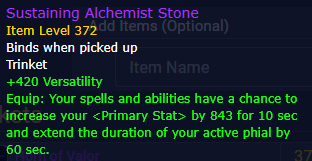 Verdict: Rarely worth the Spark

Sustaining Alchemist Stone isn’t necessarily a bad trinket, but it struggles to justify it’s Spark cost early in the season. You’d rather spent it on a big embellishment, or a weapon, or the Alacritous Alchemist Stone. It lacks the niche its sister trinket has.

We’ll cover the raid trinkets in the next few days!