The following guide was written by Sweggles from Midwinter. He raids at an incredibly high level, and sets a high standard for all monks that follow. This is the Raid edition of the guide. It is now updated for 9.1.

Fistweaving throughout BFA was kind of niche. It was incredibly strong in the right hands, but it came with a higher difficulty and the performance gain compared to Upwelling was arguable at best. Ignoring a brief 2 week period in Ny’alotha where it took over the universe it just didn’t see the amount of mainstream playtime as it deserved. In Shadowlands it’s seen significant mainstream adoption. Let’s see what’s changed in 9.1 and how to play the spec. In 9.1 the guide has been split into separate pages for Playstyle and Gearing in order to make it easier to find what you’re looking for. This is the Playstyle page. You can find the Gearing guide here, which goes into detail on trinkets, domination gems, stats, soulbind trees and more.

These changes are clear, sizeable buffs and they are very positive. It adds choice to our legendary selection, buffs our base kit by a lot, and adds mastery scaling in a way the spec was heavily lacking.

The damage increase to our kit overall helps us a good amount although damage was quickly becoming a Mistweaver strength even before them. A previous strength is further bolstered (and Ancient Teachings gets 10% stronger too as a result). The change to Revival working with mastery is the biggest one in my opinion. Revival moved from a mediocre heal without serious raid impact to a raid wide lay on hands with multiple kit interactions and opportunities for skill expression.

The conduit changes (or “bugfixes”) to Resplendent Mists and Jade Bond are both good HPS increases that makes them playable in a much wider range of builds. They’re likely to be the default choices if you are playing Chi-Ji. Speaking of Chi-ji, you’re likely to see a heavy shift toward the bird in general. Refreshing Jade Wind remains solid for HPS (especially if you have access to spare innervates) but Chi-ji combines mana efficiency, spot healing and overall flexibility to be an extremely strong choice. It also synergizes very well with Shadowed Orb of Torment, a ridiculously overbudget mastery trinket from Sanctum of Domination.

The rest of the guide is also up to date, but I’d like to highlight a few changes to how we played in 9.0.5 so that you can get yourself up and running faster.

With the changes to mastery scaling on Revival and the conduit fixes for Chi-Ji, Gust of Mists and mastery in general becomes much more valuable than it was. If you are playing very well, then you’ll find it very close to Haste, Crit and Versatility in value, and it can even pull ahead depending on covenant. On-use mastery trinkets also go up hugely in value. We’ll go into much more detail on stats a little further down the page. The 9.1 changes don’t hugely impact the way we play, with the buffs instead just making us better at our current playstyle. The biggest change in playstyle will be playing a lot more Chi-ji in progression raiding. It was already arguably the best choice on the row and the changes heavily buff it further.

The Venthyr legendary, Sinister Teachings, was buffed heavily shortly before the patch went live. You’re now able to reduce the Fallen Order cooldown to sub 1 minute which is extremely strong. You also get access to Theotar which is one of the strongest healing soulbinds in the game due to Token of Appreciation along a triple potency route. This is a lot of free healing for no cost. If you pursue this choice then you’ll put a high priority on crit to maximise cooldown reduction.

Is is better than other covenants? They kind of have different strengths and Ancient Teachings and Sinister Teachings are both incredibly competitive. Venthyr is likely stronger on overall healing, but trades larger cooldown windows for smaller ones in the process. It’s also somewhat more likely to get nerfed than anything else in the Mistweaver kit since 100% Fallen Order uptime is possible which may or may not be intended. 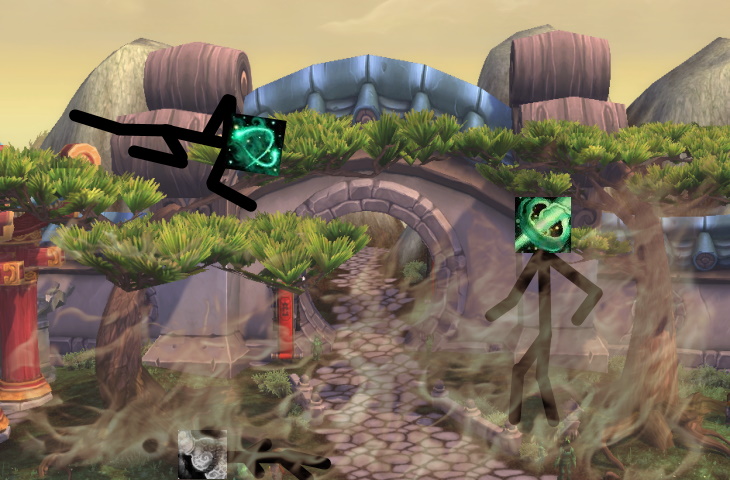 Let’s just get this age old question out of the way immediately. In my opinion Rising Mist is strictly better than Upwelling in almost every regard.  I don’t think there is a good reason to not be Fistweaving. Dispel any fears about melee uptime because there aren’t really many fights in the raid that pull you out of melee for long. You are also considered a melee for mechanics regardless of talent choice so it’s actually safer for your raid if you’re in melee a lot of the time. For fights with tight DPS checks like Sylvanas, adding 900+ DPS is of huge impact.

Rising Mist does equal or better healing, a lot more damage, and it is much more mana efficient.

Something to always keep in mind when playing Rising Mist is that your rotation sometimes changes depending on what the boss is doing or what the raid is looking like health wise. That being said there is still a general priority that you want to follow.

How do I know when to stack 3 Tiger Palms or just use 1 Tiger Palm?

Don’t get caught up with this part too much. There are much more important metrics to maximise than accidentally getting your kick rotation wrong. Ancient Teachings does not change the priority list.

If the raid needs to stay alive and you need to spam Vivify even at less than 5 Renewing Mist then by all means do it. Your job as a healer is to keep the raid alive. Play for the kill, do not play for the parse.

Use Yu’lon during points of high damage and always alongside Mana Tea or an Innervate. You’ll fill its duration with as many Enveloping Mist as is necessary for the incoming damage. If you don’t have an innervate then you’ll need to pay close attention to your mana here.

During Chi-Ji you want to be using Enveloping Mist at either 1-3 stacks.

With Ancient Teachings you want to keep up the buff from Essence Font for the duration of Chi-Ji. Cast an Essence Font before using Chi-Ji and during if needed. Make sure you are still casting Rising Sun Kick during the duration of your Celestial since extending the Enveloping Mist buffs is a lot of extra healing.

How do I use Mana Tea?

How to Improve your Gameplay

Fistweaving can be a little difficult to understand sometimes since it differs quite a lot to how healers in general play. Here are some methods you can use to break down your logs yourself and to understand how to improve.

Look at your Casts per minute (CPM) on some abilities and compare to what the top logs are doing. You can find these under logs by clicking on Tables and then looking at Casts. There are five key abilities that you’re looking for: Tiger Palm, Blackout Kick, Rising Sun Kick, Essence Font, and Renewing Mist.

You should aim for something around the following:

Wowanalyzer can give you recommendations and statistics based off your logs. The Mistweaver module isn’t maintained anymore, but most of the information is still very useful. It is very simple to use. Use the Suggestions tab to see what you can improve on at a basic level.

Make sure you are scoring highly for key spells like Rising Sun Kick, Thunder Focus Tea and Renewing Mist. You want to be using these almost off cooldown so if they are on your list of improvements as in the above screenshot then that’s a large improvement you can make.

The core rotation is quite similar regardless of content type which means you can find pug normal or heroic groups and just practice getting your rotation down perfectly. Building muscle memory is incredibly important because it’ll let you focus more on the mechanics during a hard boss while you auto-pilot the basic rotation itself.

This is dependent on a number of factors including your raid composition and the boss you’re about to progress on. If the fight does not have good AoE damage patterns for RJW then you more than likely want to play Chi-Ji. Using Chi-Ji also means that you have better mana sustain as you will not be needing an innervate for Yu’lon and you will not be using a lot of your GCDs on RJW which means you can spend more time on free abilities or lower cost abilities. Think of Chi-Ji as a mana saving tool in conjunction with Ancient Teachings. It might not do the absolute maximum HPS possible but it does within a couple hundred HPS of RJW while having no constraints on mana or on innervates. It’s your default choice in 9.1.

You’ll play Chi Burst 90% of the time. Enveloping Mist + Enveloping Breath should make up 20%+ of your healing before you consider playing Mist Wrap.

How do I use my Covenant ability?

What should I be using Thunder Focus Tea on?

Thunder Focus Tea should be used almost exclusively on Rising Sun Kick, and exclusively so when running Ancient Teachings. The only exception is when you are out of range, or are unable to melee for 15 seconds. Ideally you’ll use TFT directly after casting a full Essence Font. This allows you to fully extend the HoT while getting a lot of direct healing from Rising Mist.

What if the guide differs from top logs in some aspect?

Top logs are not always the best way of indicating what is correct. A lot of the top logs are playing for the parse and are not playing for the kill. You should not just aim for the biggest HPS possible to impress the 3 people in your raid who actually care about that. There is much more to being a viable healer than that. Often top logs are able to abuse heavy innervate usage and Power Infusions to take mana heavy talents and this is usually not the play for progression.

I’ve got an extra question for you

You can bring any extra questions to the Peak of Serenity discord, or to me directly. We’re always happy to answer questions.

If you want to watch Sweggles live in action, you can catch him on Twitch at https://twitch.tv/SwegglesQT, on Discord at sweggles#0001 or on Twitter @sweggles1. You’re also more than welcome to leave a comment below.

5 responses to “The 9.1 Fistweaving Compendium – Playstyle”