Comparing different trinkets has never been more difficult, with the Warforging system offering each trinket up at multiple different ilvls. To make analysis easier, trinket procs will be compared at 400 ilvl with exceptions specifically noted. Trinket value differs depending on the specific encounter you’re progressing on so keep a set of high ilvl trinkets where possible. A lot of the trinkets available right now are different variations of stat sticks, all of which are similar enough in strength that you can go with your highest ilvl option.

I have X trinkets at Y item levels. How do I know which are best? 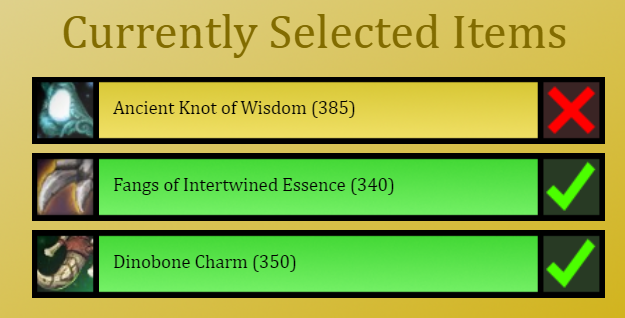 QE Live is an online app that’ll tell you which of your trinkets or Azerite Pieces are best. It has full support for sockets, tertiary stats and more. It also includes all DPS trinkets, which common picks in Mythic+.

BFA is very heavy on different types of stat sticks and they’re all similar in strength. We generally prefer sticks with intellect main stat (like the Conch of Dark Whispers) over secondary stats. They’re mostly worth the same amount of average stats over a fight but intellect trinkets have more of their strength allocated to static, consistent power which is desirable as a healer.

Stat sticks can be categorized as either on-use trinkets or random procs. On-use trinkets provide fewer stats but make up for it in power since they can be used at the same time as a big Flourish or damage window. All of these trinkets are close enough in strength that you can always take the higher ilvl of the two outside of a few weak outliers like Balefire Branch.

Healing Proc trinkets were given a massive buff in 8.2 and now compete well with stat stick variants. They still don’t scale with incoming damage well, but the flat values are so high that you’ll need to be doing top tier content for them to start falling behind again.

While 90% of the expansions trinkets will likely fall into the above two categories there are always a few that are outside the box.

How is your UI looking? Sorted for Macros?