In patch 8.3 I added a new button to the QE main menu. The “Cooldown Planner”. A quick Alpha version was scratched together in the QE Live BFA engine before being remade with Shadowlands as part of the new engine build. It sat on the edge of release for years but we could never really settle on a finished module that was both easy to use, and that brought you something you didn’t already have. It’s growing size and complexity even necessitated a split into two separate modules. Today, the Alpha releases are now usable. 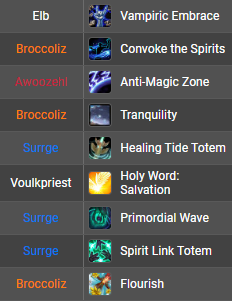 Sometimes you just wanna unleash everything at once.

Step 1: Add your healing team, or automatically import it.

Step 2: The automatic cooldown import should give you a solid base to work with and make planning your cooldowns an order of magnitude faster. If you can’t find anyone else running the same comp as you (hello 5x mistweaver comps) then grab one that’s close and convert the ones that don’t match.

Done! You can fine tune from there. All healer, and DPS survivability cooldowns supported and you can pick whether you want to include the smaller ones or just the big ones. You can also just assign healing potions / health stones for particularly dangerous mechanics.

Assigning cooldowns is an essential start but is often only half the battle. Ensuring healers stick to them, and that you are assigning coverage to the most important parts of the fight is next. The fight Analysis module overlays your cooldowns with the fights damage taken and the raids health so that you can ensure your assignments are appropriate. Let’s take a look at it:

The timeline graph is still a work in progress, but you can already clearly see the most dangerous parts of the fight, and where cooldown coverage is insufficient (or even where healers died). Turn on and off damage or cooldowns to get in depth information on where you’re likely to lose people. 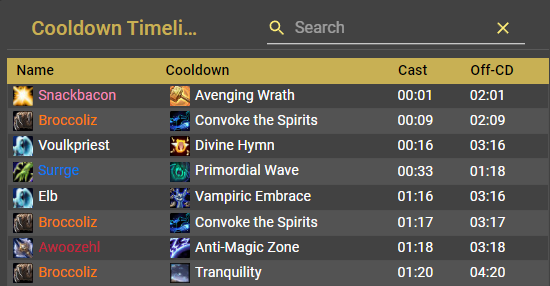 Check when major cooldowns are being popped and compare them to your cooldown plan. Make sure they are being used.

Externals like Ironbark and Guardian Spirit are frequently underused by most raid comps when they’re actually extremely good life saving tools. Make sure they are being used (and yes that’s a self-cast pictured above but hey I didn’t die). 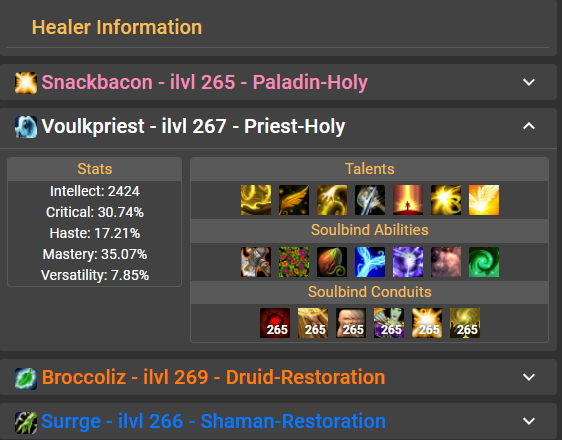 Lastly, get information on all of your healers in one place. Not as important as the above but still useful for making sure your Paladin didn’t swap to Night Fae while you weren’t looking.

Both modules have an extremely flexible roadmap. If there’s something you want in, let us know and there’s a very high chance it will be done. They should be available for testing extremely soon.