Hello everyone! My name is Sweggles, I raid in Might on Zul’jin and I have been a Mistweaver main/fanatic for 5 years now. This Dragonflight guide is intended for those who wish to maximize their performance on Mistweaver Monk in raid.

What changed going into Dragonflight?

Dragonflight introduced a new, revamped talent system for all classes and specializations. With the new talent tree, Mistweaver has seen a lot of new goodies and the reappearance of some old favourites which we will get into later. The only notable things which were removed going into Dragonflight was our Venthyr covenant ability: Fallen Order and Kyrian covenant ability: Weapons of Order.

I know this is going to be a sore spot for a lot of Mistweaver mains out there but I wanted to briefly talk about this to clarify some issues with Mistweaver Monk and how it should be played in PvE content. Mistweaver Monk is considered a melee specialization by the game’s targeted mechanics in PvE content. Furthermore, our kit largely focuses on melee  abilities for DPS and talents that synergistically amplify our healing and damage. For this reason we are going to consider the standard “Fistweaving” build as just being considered “Mistweaver”. Any ranged build option will be considered “Ranged Mistweaver” or as I like to call it “Rangedweaver”.

With the revamp of the talent tree in Dragonflight, Mistweaver Monk has received a lot of new (and some recurring) talents that drastically change the playstyle, healing profile, and overall feel of the spec. For this section we will primarily be talking about the Mistweaver tree directly. The Monk class tree will be spoken about later but for now we will focus on the most impactful talents we have and what a standard Mistweaving tree would look like for raid and M+.

This is the gold standard Mistweaving raid build for 10.0 with current tuning. This build allows for you to do high DPS while maintaining consistent HPS and frequent small burst HPS and occasional larger burst HPS windows. The primary focus of this build is to apply as many Renewing Mists as possible with the maximum amount of Ancient Teachings (renamed from Ancient Teachings of the Monastery) uptime. 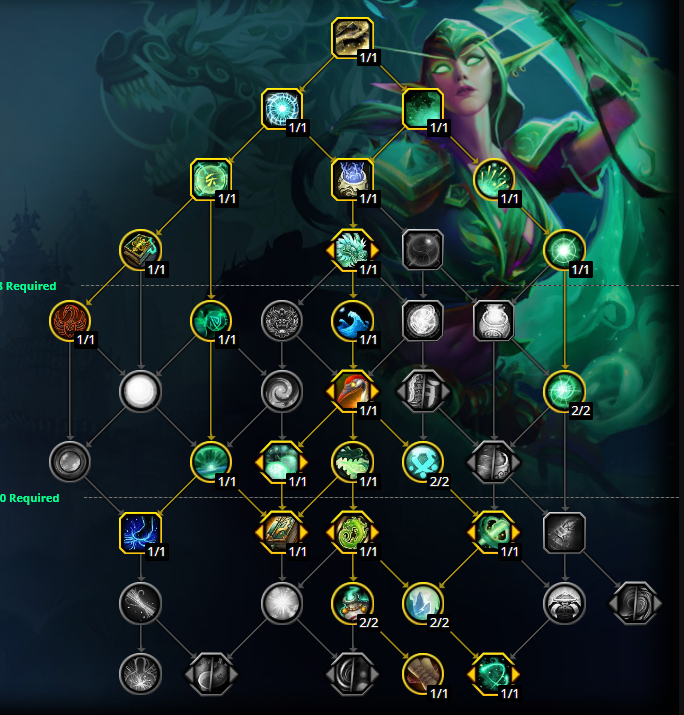 With this tree, Renewing Mist becomes one of our highest priority healing spells in raid encounters. We want to be using it as much as possible to capitalize on the selected talents.

Some other notable talents in the tree that we will highlight here are:

I understand the build… How do I play it?

This section will only cover new changes to our playstyle in Dragonflight. If you are new to Mistweaver, make sure to check out the Fistweaving Raid Compendium to learn the basics of healing in raids first.

Due to how powerful Renewing Mist is in Dragonflight, we want to be making sure that we are casting it off cooldown. To do this we will be changing our rule of thumb from previous expansions and shifting Renewing Mist up the priority hierarchy. Our new priority list goes as follows:

In downtime, you should be DPSing and following the standard rotation while utilising your instant Vivify procs to do bonus spot healing when applicable. Because you play Spirit of the Crane, you want to be DPSing as much as possible to supplement your natural mana returns in order to not go OOM (Out of Mana) as quickly.

This is generally all you need to know for the playstyle in raid outside of your celestial window.

Some Other Cool Interactions:

Chi-ji is generally your go to celestial with Jade Bond because of how much it buffs your direct Gust of Mist HPS from Chi-ji and how little Chi-ji costs relatively to Yu’lon. This does not mean that Yu’lon is entirely out of the question and it can be played but under certain conditions. Chi-ji means that you do not need to require an innervate to keep you from going OOM which is a huge boon for us in raids because if we are able to remain self-sufficient then we are more likely to be taken.

Spirit of the Crane or Mana Tea?

Spirit of the Crane is generally going to be better for the casual player. Mana Tea can be min-maxed and be a lot better for you if you are able to consistently spam Vivify during it. I recommend for experienced players to use Mana Tea if the fight has burstier windows. For any other fight where you do not need to spam Vivify as much, it is best to go with Spirit of the Crane.

What happened to Refreshing Jade Wind?

Refreshing Jade Wind got reworked and now it falls behind comparatively to the other talents available. It can be good depending on the fight (like if rot damage is prevalent) but generally this talent is never going to be played because of it being on the same choice node as Mist Wrap (which is a major HPS increase with Misty Peaks).

Gift of the Celestial or Jade Bond?

This is entirely dependent on the fight’s timers. If there are consistent 1 minute raidwide damage mechanics then Gift of the Celestial is going to be a lot better. If there are less consistent timers then Jade Bond is going to be better. It is worth noting that whenever you are playing Yu’lon you want to only ever play Gift of the Celestial. Chi-ji has the flexibility of allowing you to use Jade Bond whereas Yu’lon does not really have this option.

Why no Overflowing Mists?

A cool talent in concept, the idea of your targets with Enveloping Mist being healed for a flat % of their HP whenever they take damage can sound very appealing however, this talent does not proc off anything but direct physical damage making it next to useless for raid.

Why no Uplifted Spirits?

Uplifted Spirits generally performs worse than Font of Life but it can be flexed to if the cooldown reduction it offers allows you to get an extra 1-2 Revivals / Restorals in a fight.

Depends on the fight and if you need a magic dispel or if a magic dispel will grief your raid. They do the same healing just one dispels magic and one does not. Restoral can also be used while stunned though this is rarely relevant in raid.

Why do we use Thunder Focus Tea on Essence Font rather than Rising Sun Kick?

A number of factors cause this shift in playstyle.

The combination of which makes the Essence Font and Thunder Focus Tea combat very rewarding and satisfying.

As the name suggests, this build is primarily for cleave healing and should only ever be used on fights with extended 2 or 3 target cleave within melee range. The main gimmick with this build is that the Faeline Stomp talents allow for you to cleave Blackout Kicks to nearby enemies but still provide all the benefits from Ancient Teaching and Chi-ji’s Gust of Mist healing. This means that in any scenario in a raid where you will be able to cleave 3 targets, you will do incredible HPS and DPS. This is important because in the first tier there is a 4 target cleave fight. 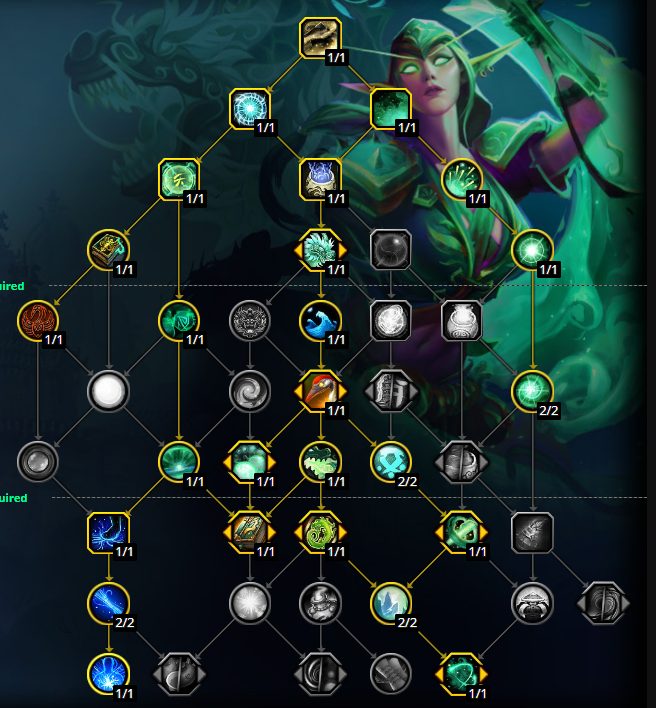 Let’s quickly go over what makes this build work and why the talents are played.

How does this build change the way you play comparatively to the way you would play the standard build?

Yes, it is definitely viable if you have a scenario where the raid is stacked and you can play around its 1 minute timer. Because you do not play Secret Infusion you do not need to exclusively press Thunder Focus Tea on Essence Font and you can use it on some other things. This makes it possible to swap Upwelling for Bonedust Brew if the fight is good for it.

Should I ever play Invoker’s Delight?

You can if you would like to play a more DPS focused build. Depending on the situation you may find this more beneficial than Rising Mist because you can still do relevant HPS but you will do significantly more DPS and have higher uptime on Chi-ji as well

Does playing the cleave build increase my mastery stat weight?

Yep the cleave build makes Mastery even better to the point where it rivals even Haste. You’re still good to stick with the priority above though and you can use QE Live to check your specific pieces.

The class tree is largely utility and defensive buffs with some major nodes that should always be taken in a raid environment.

Here is the ideal talent tree that you would play in raid. This covers all your bases defensively, offensively, and gives you all the required utility you may need apart from some specific scenario nodes like Paralysis and Provoke. Let’s go over some of the key nodes that need to be played. 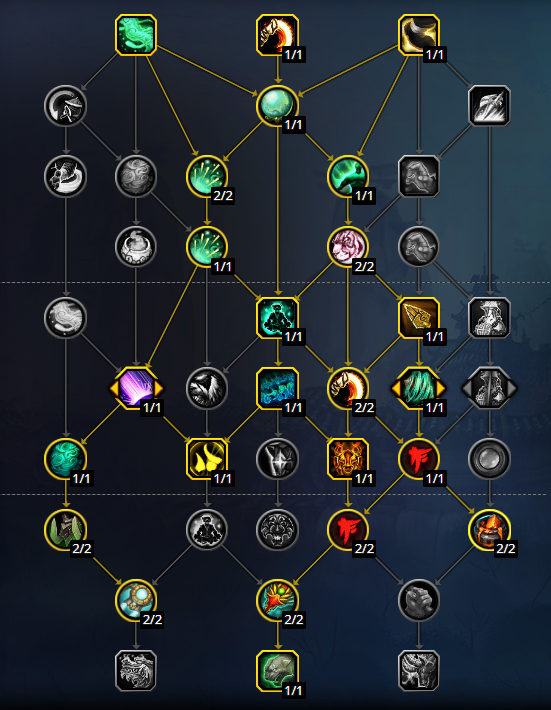 The other notable talents in the tree that should always be taken:

Overall I am extremely happy with this iteration of Mistweaver and I hope that you will enjoy it as well. I think we are very strong in a lot of aspects of the meta and we are competitive in all forms of content. The playstyle is also extremely fast paced and very engaging which reminds me of Ny’alotha Mistweaver before haste broke the spec. I hope that this guide was helpful and if you have any questions please feel free to ask me directly in the Peak of Serenity Discord or on any of my social medias: