Mythic+ I: The Basics

Mythic+ I: The Basics

Healing as a Resto Druid in Mythic+ is somewhat similar as healing a raid except you have to take on the bulk of the spot healing yourself and the damage patterns are often burstier. You’ll need to run each dungeon a few times to get a good feeling for the damage patterns since, like raid, pre-hotting is incredibly important. Make sure you’ve read through the essentials chapters of the Resto Druid guide before you get started here since a basic grasp of your abilities is assumed.

Remember: You can contribute much more to a dungeon than just healing. Don’t forget about your powerful damage and utility.

Mastery is our best Mythic+ healing stat due to the high average number of HoTs we can have on allies at any one time. Haste is second best since it helps us respond to the burst damage common in dungeons and we are generally able to chain cast without issue in Mythic+. It also increases our DPS so it’s a great allrounder. Crit and Versatility are further behind but are still very useful – particularly while DPS’ing. Think of Mastery as your damage throttle. The more confident you are in healing the key, the less mastery you can get away with (ultra high keys even run with very low mastery builds to maximise damage). 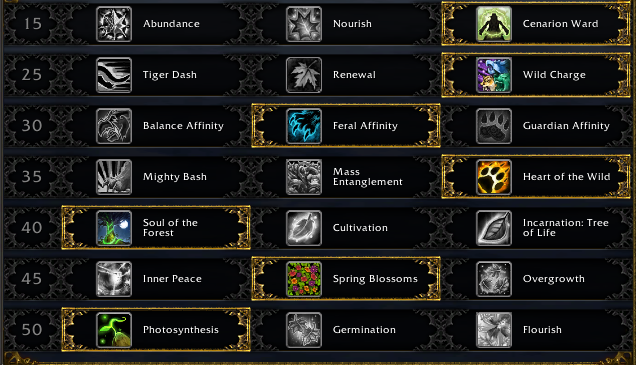 Read more on Feral vs Balance Affinity below.

Variations to the Standard Build

Resto pairs strong healing with powerful utility and to not make full use of it is to waste half your kit.

Ursol’s Vortex: Use it to kite mobs, or with Typhoon to tightly pack mobs together.
Soothe: Removes enrage effects from mobs. There’s something to Soothe in almost every dungeon.
Typhoon (Balance Affinity only): Use it to knock mobs out of Sanguine, interrupt most casters, or buy your tank some breathing room. Many mobs can be interrupted this way.
Entangling Roots: You can use Entangling Roots to stop a patrol coming your way, or to separate a melee mob from the rest of it’s pack.
Growl: Use it with Bear Form to tank a boss for a couple of hits to let the tank drop Necrotic stacks.
Bear Form: This is an incredibly underrated defensive ability, and after Barkskin is down it should be the first key you hit if you are in personal danger. If the entire group is getting hit you might have to rely on health potions instead since you aren’t able to heal while in Bear, but make sure you have this keybound all the same.

Pedestal of Utter Hubris: +12% haste in combat but you take 5% of your health in damage every 3s. Must take.
Bottle of Sanguine Ichor: Healing has a chance to cause you to splash Sanguine Ichor, healing up to 5 allies and dealing Shadow damage to up to 5 enemies within 12 yds.
Champion’s Brand: While above 70% health, your Mastery or Critical Strike is increased by 210. Your highest stat is always chosen. Fine, but weaker than Pedestal.

The Stone Ward: Shields you for 20% of your maximum health. Refreshes every 45s.
Self Embalming Kit: Self healing is increased by 50%.
Tiny Dancing Shoes: Upon entering combat, dodge the next two melee or ranged attacks made against you. As a spec with a taunt this could be of niche but very powerful value to us. More information to come.

Satchel of the Hunt: You grant all allies within 12 yards 30% movement speed in combat.
Portable Feeding Trough: You eat significantly faster. Saves a few seconds over the key, but isn’t of particularly high value if you are actively drinking between pulls.
Gavel of Judgment: Your auto attacks stun the target for 2 seconds. 30 second cooldown. You generally don’t want to stun targets at near random. Most strats won’t be able to make good use of this.

Champion’s Brand: While above 70% health, your Mastery or Critical Strike is increased by 210. Your highest stat is always chosen. This is a better pick than last time because it’s up against weaker competition.
Overflowing Chalice: Healing a target has a chance to spawn Loose Mana which gives you 6% of your mana back. You can take this if you’re expecting very long fights, but it comes at quite a large cost.
Stabilizing Diamond Alembic: Standing Still stores healing. Moving releases it to heal the lowest HP player. Just outclassed by better picks.