9.1.5 sees the return of Legions infamous mage tower challenge. If you can knock it over you’ll get a transmog set, and if you can complete all of them there’s a mount up for grabs. This is a very difficult challenge and Mistweaver is a tricky but rewarding spec to complete it on. You’ll be joined in your adventure by three AI players. They aren’t exactly good players but they’ll have to do. To get into the Mage Tower you’ll head to Deliverance Point on the Broken Shore.

Head to the Broken Shore. There are no other requirements but a Dalaran Hearthstone will get you there faster. There’s no mail box nearby so you’ll need to bring you consumables with you.

Legendaries, covenant abilities and other special effects don’t work. I’d recommend you have a few haste pieces on but otherwise your stats don’t matter much. The challenge is all about playing well. 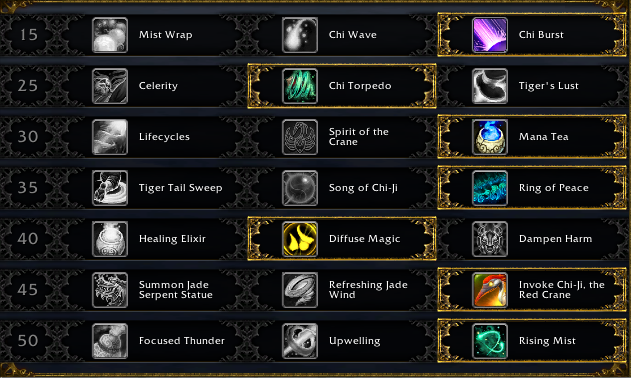 The challenge starts with a war against the undead. This is one of the two most difficult phases and you can expect it to take quite a few attempts to master. Once you have it’s extremely repeatable.

Risen Arbalest (Archer)
Special Ability: Mana Sting. Will fire an arrow that follows a big blue line. You need to stand behind a party member so that they intercept the line. It doesn’t do that much damage so any of the three will do. If it hits you it’ll quickly drain all of your mana. If you do get hit, try and dispel immediately. You have about a second to get the dispel before it nukes your mana.

The Arbalest will also shoot arrows randomly at the party for low to medium damage.

Risen Mage
Special Ability: Will spam Arcane Blitz. Every cast will give the mage a stacking damage buff but if you interrupt it the buff will fall off. We’ll use Paralysis, Ring of Peace and Leg Sweep to interrupt it.

Risen Soldier
Special Ability 1: Knife Dance. This is identical to the Knife Dance from Blackrook Hold except it cannot be outranged. You can either heal through it or interrupt it. You’ll want to interrupt it most of the time. It consists of a cast followed by a channel. You’ll need to interrupt it during the channel or he’ll recast it.
Special Ability 2: Fixate. The soldier gains a significant DPS buff and will fixate you or a party member. You can either kite with Chi Torpedo or pop Soothing Mist and just heal through it. Kiting is safer in most cases.

This isn’t too tough a wave but deserves special mention. Interrupt the first Knife Dance with Ring of Peace, NOT Leg Sweep. This means that you’ll have Leg Sweep up for the following wave 4. By using Leg Sweep instead of Ring on wave 4 you won’t desync the two Warriors and the wave will be much easier.

Wave 4 – Pop Drums here: Mage, Warrior, Warrior
Begin the round by standing on where the Mage will spawn toward the gate. I usually pop Chi-ji here straight away, and you’ll want Leg Sweep ready for the first Knife Dance set. If you use Ring of Peace instead then the two warriors will desync and be much more annoying to deal with. After the stun ends, both will fixate you. Be ready to roll away and you can even start running early. You will use Ring of Peace on the second Knife Dance cast set. You can use Paralysis when there’s only one Warrior left.

Wave 5: Mage, Warrior, Archer
This is a very tough, bursty pull but somewhat easier than the last. Stack the mage and warrior on top of each other and you’re going to use Leg Sweep to interrupt the first Knife Dance. Remember to keep dodging the Mana Sting since the wave is much less fun with no mana. Drums will get you through this pull very quickly so you don’t have to hang in there for long. Don’t save anything here – Revival, Chi-ji, Life Cocoon – use them all.

Stuff that can go wrong

This is a chance to get your mana and cooldowns back. You can AFK here for as long as you like and Stage 3 won’t start until you enter the building.

You get 5 minutes to finish Stage 3 which ends with a mini-boss at the top of a staircase. There’s a lot to get done here so you’ll need to move at a brisk pace. There’ll be a few sparkly green orbs flying around (not the eyes). You can one shot these with Spinning Crane Kick. 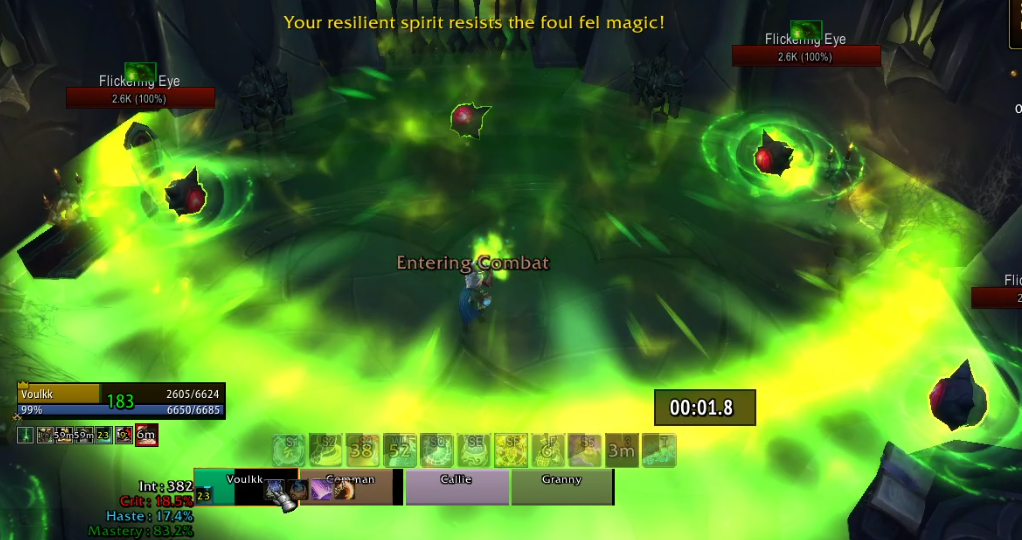 The Cronies & the Stairs

Save Grannie: The Mini-boss

Having trouble with the timer? If you pause after phase 1 you can get drums back off cooldown for this phase. You’ll use them against the mini-boss.

This is another freebie and you should use it to get mana back. If you used drums for the mini-boss then you’ll want to pause for a few minutes here so that they’re back up for the last phase.

There’s a lot going on in this phase but it isn’t too difficult once you slow it down and take it step by step. Your allies are going to turn on each other, and will take reasonably high damage. You’re going to keep them alive while healing spirits that’ll float across the room toward the boss. You need to heal 8 spirits to full to end the phase and they come in waves of three. If any spirits reach the boss we’ll have to kill them in the next stage.

Here’s our strategy over three waves:

The key here is to heal 3 on our Revival wave, 2 on the second wave and then two to three on wave 3. By leaving a spirit up we get 20 seconds to drink to full mana while the boss role plays. Had we gone 8 from 8 the boss would have engaged us right away and killing him with little mana is extremely difficult.

Any spirits that you missed will spawn as enemies and they’re similar to in Stage 1 except with a quarter of the health. Remember your CC but otherwise you shouldn’t have too much trouble unless you missed 3+ spirits. 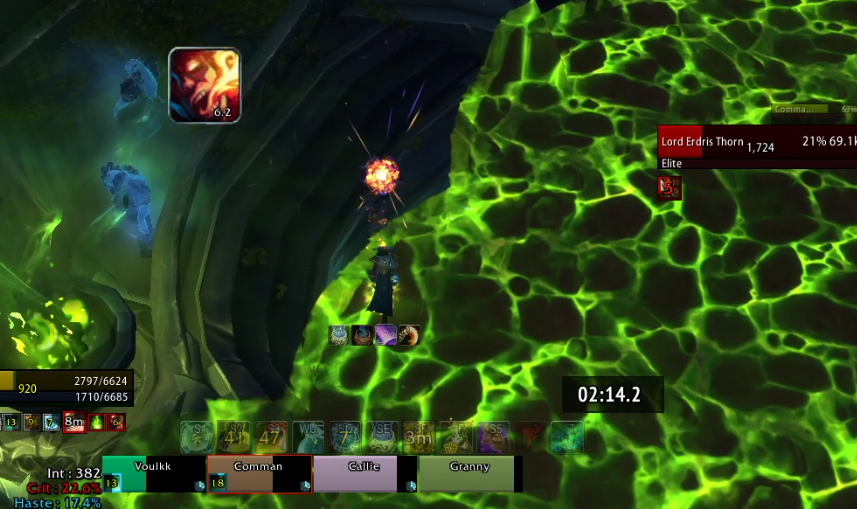 This was somehow the kill.

Boss Ability 1: Ignite Soul. A debuff on you that lasts 8 seconds and then deals your current health as damage to the rest of the party. Your success here is heavily dependent on managing this debuff well. There’s a basic weak aura for it here: https://wago.io/issSyFiJy.

Boss Ability 2: Heroic Leap. Edris will jump to you and spawn a new Fel Pool. This always follows Ignite Soul’s expiration and there’s often a second one in between debuffs. Maximise the amount of space in the room by dropping these as close to existing pools as possible.

Been at it a long time and can’t quite crack it? Here’s some cheese that’ll help