The Demon of 9.1: Domination Sockets

The Demon of 9.1: Domination Sockets

Last updated: 3rd August after the set buffs. Be somewhat cautious about upgrading shards immediately since further changes could still be made in the next 48 hours.

Domination Sockets are a new raid focused gearing system being introduced in 9.1. There are three different colors of gems, each of which have three different types (offensive, defensive and healing / utility) and each of those types have five ranks. You get a special set bonus in raid and the Maw for wearing all three types of one of the gem colors. It’s a lot to process, but in practice it won’t be too complicated. You’ll wear your best set of three gems, and then your best two individual gems of the other two colors. You’ll spend Stygian Embers from the raid to upgrade your individual gems and you’ll do so in order of their individual strength. All guides will be updated to help you through it but the priority on raid release will just be to grab the Domination Socket pieces themselves. Each gem is unique, and you can only socket one of each.

Domination slots are on specific pieces of gear that drop in the raid. They differ slightly by armor type. They drop in every raid difficulty, and the socket set bonuses appear to be equally as powerful whether on an LFR piece or a Mythic item.

How do they compare?

The numbers below are based on an average mythic log. To get charts customized to your individual character, go to QE Live. The Frost set in particular depends heavily on which spec you’re playing and this is discussed more in the Frost section further down the page. 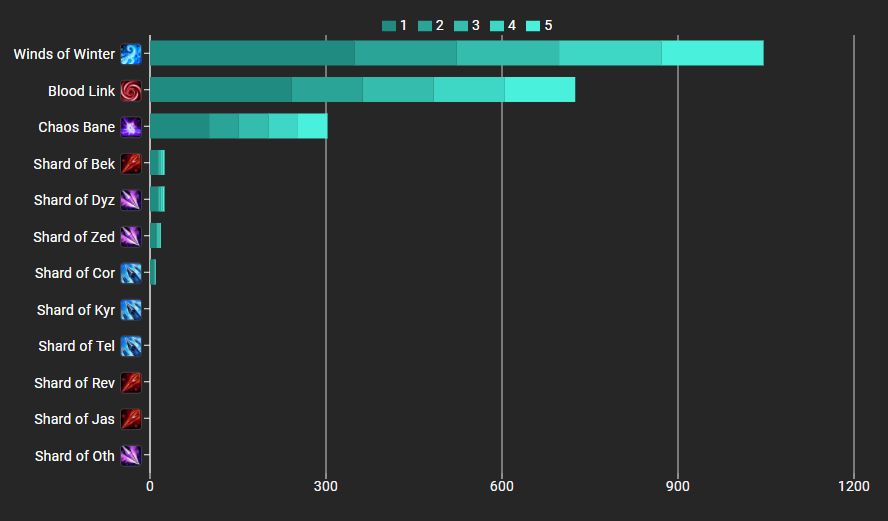 Shard of Jas (Defensive): Increased healing received by 1-1.5%. Maximum health increased by ~400. The increased healing received is reasonably useless on a healer, but the maximum health increase is pretty good.
Shard of Bek (Offensive): Damage increased by 2-3% when you have 50% or more health than your target.
Shard of Rev (Healing / Misc):  Your leech is increased by 35-52.
Bloodlink (Set bonus): Drains health from your enemies and redistributes it to you and your allies. The set bonus is limited to one target, and will change to the target you last attacked. It can crit too but has no haste scaling.

The blood set is kind of middle of the pack. It does good damage, and so-so healing. It faces tough competition from the Frost set now for most healing specs, though Shaman might still grab it if optimizing for damage.

Shard of Kyr (Defensive): Gain 880-1320 absorb every 5 seconds, stacking up to 5 times.
Shard of Cor (Offensive): Your damage is increased by 3-4.5% for 20 seconds after attacking an enemy you haven’t damaged.
Shard of Tel (Healing / Misc): Your critical hits cause a nearby ally to absorb the next 228-342 damage to them. This has a one second cooldown, but does proc off (most) HoT ticks.
Winds of Winter (Set Bonus): Every time you crit, 9% of that amount is stored in a buff. Every 20 seconds, unleash the winds stored in the buff dealing frost damage equal to the accumulation and shielding you for 100% of the amount.

Winds of Winter was an incredibly buggy set on release, but a month into the patch has been patched up such that it’s now quite good. The weird crit cap is still very low which means this is particularly strong for specs that crit often rather than those that crit for high amounts. It is also based off raw healing rather than effective healing. There are a few abilities that are particularly good for this with Ashen Hallow being the absolute king and hots / atonement being next best. Since this one is so spec dependent here’s a bit of a breakdown (and use QE Live for a more precise answer):

Remember this is all from a DPS perspective. For healing Unholy is still much stronger.

Shard of Zed (Defensive): Your helpful spells and abilities have a chance to grant your target an Unholy aura, draining 221-332 health from enemies every 2 seconds for 10 seconds. This is working on live servers, but is attributed to whoever gets the buff as opposed to whoever is wearing the shard.
Shard of Dyz (Offensive): Damaging a target increases your damage done to that target by 0.33-0.5% for 4 seconds, stacking up to 3 times.
Shard of Oth (Misc): Your speed is increased by 26. Zoom zoom.
Chaos Bane (Set bonus): Your abilities have a chance to increase your intellect by 10, stacking up to 15 times. When you reach 15 stacks, deal ~1600 damage split between nearby enemies and gain 300 intellect for 15 seconds. This is equal to about a ~6.5% DPS & healing increase at rank 1, and a ridiculous amount at rank 5.

While the unholy gems are individually poor in their current state, the set bonus is extremely good and is dominant from a healing perspective (while adding only a little damage).

You can upgrade gems at Bonesmith Heirmir in Korthia after completing the 4th chapter of the new campaign. You will want to prioritize upgrading the gems that make up your set bonus first. The set bonus itself upgrades by 50% per rank which is incredibly significant. The strength of the bonus is based on your lowest gem in the set so you will want to level them evenly.

All numbers calculated at 1500 base DPS, 10500 base HPS, 10% versatility and 20% crit. Your own numbers will vary slightly, but not enough to change your decision making.

17 responses to “The Demon of 9.1: Domination Sockets”