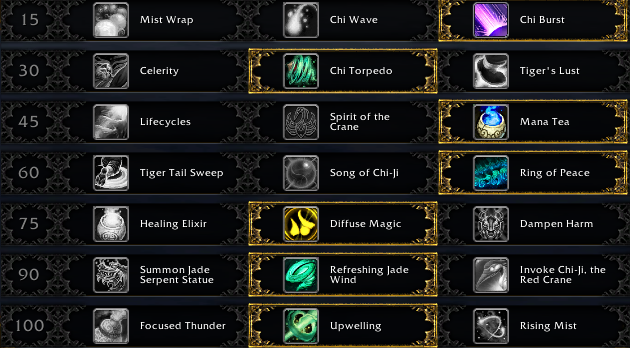 The talent tree is reasonably fixed but the following variations can see occasional use:

Remember that the Rising Mist build has been separated into its own guide which you can find here.

Our best mistweaver specific raid traits are Font of Life and Secret Infusion. Font of Life does drop a lot in value after the first so you’re unlikely to wear more than one and even the first can occasionally be beaten out by Secret Infusion and large stat traits. Use QE Live to take the heavy thinking out of Azerite.

FAQ: The elephant in the room: Font of Life in high parses

Despite Font of Life only being strong as a one-off trait, you will see a lot of them in high parses. You might wonder why this is since it conflicts with both the information given above and gearing tools like QE Live. Analysis of the logs reveal the Font of Life traits doing as little as ~700 HPS per trait – even in these specific high logs. The stat traits they are often giving up to wear them such as Heart of Darkness add about three times that. There is not a strong reason to wear triple Font in your best in slot set.

When gearing your Mistweaver Monk you’ll decide between two major corruption builds. We’ll call them “Severe & Friends” and “Full Vers Stack”. I can’t tell you which to pick, but I can discuss some advantages of each to help you make your decision. There isn’t a large gap in throughput so you hopefully won’t have any buyers remorse regardless of your path.

If you mostly focus on raid I’d recommend the Crit strategy, and if you’d rather push high keys or PVP then Versatile might be more your style. Both builds should opt include the Flash of Insight Drest’agath weapon, optimally at 475 but a 460 is acceptable.