The Spark of Ingenuity is a rare crafting material that we get one of every 2 weeks. Most of the strongest crafted gear requires these which means we’ll only be able to craft 1-2 pieces of high end gear at the start of the season.  That seemingly puts quite a bit of pressure on us to make sure we craft the right item since crafting the wrong one can’t be rectified for two weeks.

Some crafted items have special effects called “Embellishments”. These are extra effects on top of an items regular stats but we’re limited to two of them. Embellishments come in two different types: 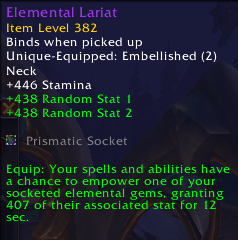 Note that you can also set the stats you want on it manually.

Elemental Lariat is maybe a little more complicated than it needed to be. The short version is that one of your gems will empower a couple of times a minute and give you a specific secondary based on the “element” of the gem. Stat procs are nice and the uptime on the neck is fairly good. It’s an unexceptional but solid choice that’s valuable in all content types.

The long version, and I promise you can skip this if you like, is that each gem has an element associated with it. Frost gems include the Versatility gem + any Hybrid gems that have Versatility as their minor stat. Here’s a quick chart:

Lariat recently got a slight nerf that reduced its power by 5% and prevented multiple elements being active at the same time. Assuming they implement this change correctly it’s a very minor nerf to it. 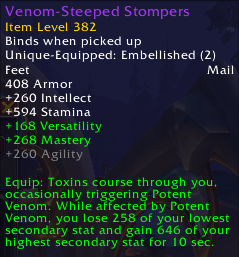 Venom-Steeped Stompers are quite a bit easier to understand than Elemental Lariat. We’ll get a couple of procs a minute that’ll give us a ton of our best stat (or at least, the stat we have the most of) and reduce our least common stat by a smaller amount. We’re a good fit for an item like this since our best stat (Mastery) is significantly more valuable that our weakest stat. Unfortunately though it just doesn’t compare that well to Elemental Lariat. There’s a small chance we craft these on a later week but for now we have better selections.

This is a unique bonus that’ll extend a potion of our choosing by 50%. There’s really only one synergy we’re interested in here and that’s it’s effect on the Potion of Chilled Clarity. Potion of Chilled Clarity reduces our mana costs by 100% while active and the purported downside (+40% cast time) doesn’t actually apply to instant cast or empowered spells. That means the embellishment buys us another 7.5 seconds of free casts a few times a fight. This has the highest possible contribution on paper, however it does have a few conditions to be good.

There’s undoubtedly potential here, but it’s likely to be something you can grab in two weeks time when we have a better feel for Evoker mana consumption and what kind of fights we’re dealing with.

Magazine of Healing Darts fires darts at a random target a few times a minute. The first target it hits will get a medium sized heal. You’re unlikely to ever slot these because Elemental Lariat and Venom-Steeped Stompers are just clearly better and are also effective in all content types.

Blue Silken Lining could be good on paper if you were ever able to keep it at a very high uptime. We also tend to be quite high on health due to a ton of self-healing effects (in order to use our Mastery). 90% is a tough threshold though and we’d prefer it not turn off when raid damage is at its highest.

In addition to the Embellishments above we can also spend a Spark on the Alacritous Alchemist Stone. This doesn’t count toward our Embellishment limit but will cost us one of our Sparks so short-term it’ll need to be included in the comparison. Here are our options, of which we’ll pick two:

For raiders, most will want to go with Lariat + Alacritous Alchemist Stone. You’ll then need to prioritize farming a weapon as soon as possible. High end raiders who don’t mind taking a risk could opt for Primal Molten Blade + either of Lariat and the Alchemist Stone. This is a much more expensive option with worse carry over to other content types but on paper at least it also has the highest potential. Those who don’t intend on finishing progression inside the first two weeks can afford to grab Potion Absorption Inhibitor as their third option if it proves strong. Ultimately the difference between the top few choices for Evoker is not that significant and while this choice feels big, it’s not really.

If you don’t intend on raiding at all then your choices are quite a bit worse. Elemental Lariat and Venom-Steeped Stompers are a “fine” combination. You could also opt to prioritize an engineering tinker but I won’t be recommending that here since it might depend heavily on the needs of your group. If you raid at all then you’re better off making your choice based on the paragraph above.