Patch 9.2 is now upon us and brings with it a swathe of healer changes, new tier sets and the ability to wear two legendaries (your covenant legendary and one other). Let’s see what it means for Mistweaver, 9.1s throughput powerhouse. As always, expect new information to roll in once the patch is live and we have significantly more data to compare to our models. 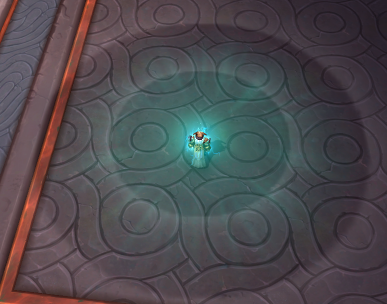 The 2pc bonus is quite dull, and you won’t notice much of a change in power when you pick it up.

While the 4pc bonus is quite strong in it’s current form, it’s very heavily tied to Refreshing Jade Wind and Essence Font which make up the majority of our healing events. We’ll also swap to Chi Burst for even more healing. This pushes Mistweaver further into the current 9.1 playstyle where raid frame interaction is almost optional. I’d prefer seeing Refreshing Jade Wind removed from the 4pc spell list in exchange for a buff to the flat healing value on the set. Same flavor, but much more interesting to play around. Given the patch’s imminent release it’s unlikely we’ll see any further changes.

Complaints of a stationary rune being an odd fit for a high mobility healer are valid, though it’s likely to play ok given the very short cooldown.

These are net nerfs overall, however Mistweaver was in such a good state that these are reasonably fair. They do a good job of bringing covenants closer together (discussed further below).

Which to play and when?

You have a lot more covenant flexibility in 9.2 than you did in 9.1.5 and if you enjoy one substantially more than the others then it’s likely you’ll be able to play it without giving up too much power. The current recommendations are as follows, however all four covenants are very close in power so check back for updates when we can see the fights:

Ultimately, while Necrolord is strong in the right scenario, Mistweaver can’t progress with Necrolord alone since it has a moderately high drop off on fights where you’re not able to hit a high percentage of the raid. You are better off playing even a critically nerfed Venthyr than hitting 4-5 people with Bonedust Brew on such a fight. Timers are also going to be relevant here since fights with big 1 minute timers like PTR Anduin are particularly kind to Necrolord.

Double legendaries have only a small impact on your choice post-nerf. Bountiful Brew is a bit better than Sinister Teachings in HPS but the difference isn’t major.

In depth Breakdown including Legendaries 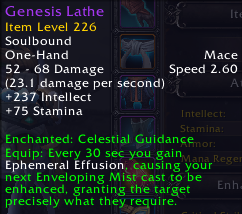 “Granting the target exactly what they require” is a little cryptic so here are the three possible effects:

With current tuning you’re unlikely to seek this weapon out, and will prefer a non-effect weapon of equal item level where available.