We’re expecting patch 9.2 some time early next year. They’ve started testing the raid quickly which is a decent sign that the patch won’t be more than a few months away.

Healer Mace: Lathe of the Lifeweaver 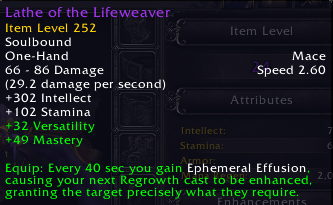 Here are the possible effects:

This is a very strong bonus, with the 2pc adding a lot of healing and the 4pc adding a significant amount of Tree of Life uptime (more than double what you’d get without it). Tree of Life as a talent will remain good, but Soul of the Forest will also rise a lot in value through being able to SotF Wild Growth during your free Trees. The last bonus was a 2/10 both in design and power. This is an easy 9.

In Mythic+ it’s not quite as strong. The 2pc will still add a lot of healing, and if it offers a mastery stack then you’ll run the first bonus for sure. Mythic+ is a damage-focused environment but free healing is free healing. The 4pc is a little rougher, Tree isn’t of much benefit in a small group environment and the procs are unlikely to be of much value.

None currently, though there haven’t been many spells changes for any spec yet and they’re likely to happen quite late in the PTR.

For raid Night Fae is still a completely dominant choice. In Mythic+ you’re likely to go Kyrian for high end push keys, with Necrolord and Night Fae also being more than good enough for the vast majority of keys.

Our 2pc tier set adds extra value to free rejuvs and so the dominant raiding combination is likely to be Celestial Spirits and Vision of Unending Growth. As always there is still plenty of time for changes to be made but this is going to be a very strong combination.