You can pick up the addon on Curse or WoWInterface. It is also available through the Twitch client (QE Mythic+ Dungeon Tips, enable Beta releases) and at leading retailers everywhere. Full Shadowlands update 5.1 now live.

You have the QE written guide, the QE beach towel and the QE action figure. Now pick up QE M+ dungeon tips addon. The new addon displays useful information inside mob tooltips – never again forget which mob has that massive AoE that dumpsters your party. As a beginner it will hold your hand through your first few dungeon runs; if you’re closer to intermediate, use it to tell similar mobs apart and perfect your dungeon performance. Shadowlands dungeons are now live. 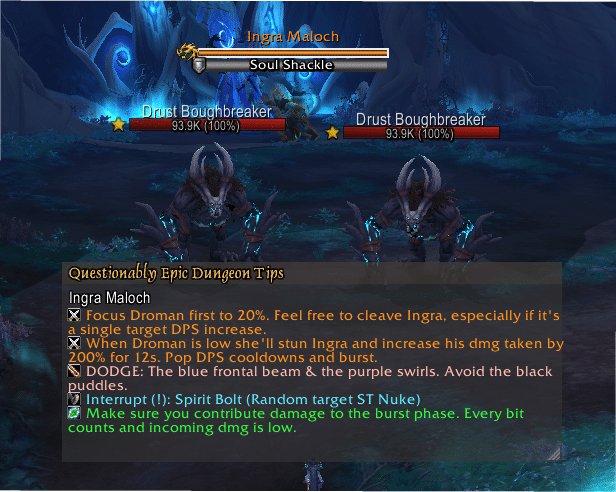 The addon automatically adjusts to whatever role you are playing. Are you the next big thing in tanking? You will see tank specific stuff like when to face mobs away from the party or deadly mechanics that require a cooldown. Prefer healing your team through the 6847th fire they stood in just this week? You will see healer specific tips like which debuffs you need to dispel and mobs or bosses you will need your big healing cooldowns for. You will always see key bits of information, no matter your role, like:

Parjesh holds such a warm place in my heart that I won’t replace his image, even two expansions later.

The Shadowlands version is now live. Become the expert that fills your group in on all the mechanics they have been slacking on. Lead.