Conduits are similar to BFA’s Essences, but much easier to obtain. You can get them at multiple levels and they drop from a variety of content types. Each soulbind tree has a multitude of slots to put them in and they come in three types. Potency, Endurance and Finesse.

Niya, for example, has slots for all three early in her tree as seen here: 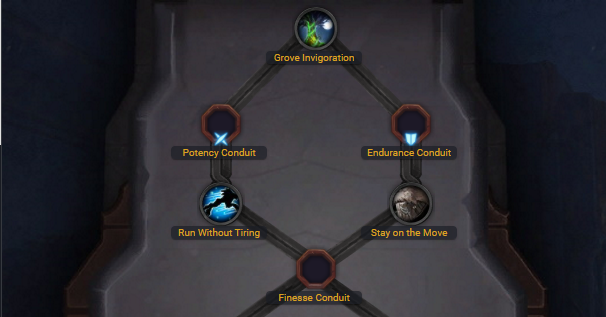 You can pick any conduit from your collection that fits in the given slot, and they’re re-usable so if you change your mind later you don’t lose the conduit. There’s a cap to how many you can change per week that gradually refills. Potency Conduits tend to be throughput increases, Endurance Conduits are defensive in nature, while Finesse Conduits offer upgrades to our utility abilities. In this article we’ll go through our options for each slot.

Flash of Clarity is a very interesting idea that just misses the mark tuning-wise. It’s in a bit of a tough spot because you can double it’s effectiveness at any time by pairing it with the double Lifebloom legendary which might make them hesitant to push it’s power level to an acceptable point for those that go without. The combination itself also isn’t strong enough to beat out a regular conduit and a higher performing legendary.

This is in need of a significant buff to make it competitive with our other choices. The correct strategy is usually to Swiftmend a target with as short a HoT left as possible and this isn’t strong enough to change that strategy. So, with regular play it contributes almost nothing. Even when playing to it’s advantages with the Verdant Infusion legendary it’s still not worth taking.

This is another one that doesn’t really perform. Nature’s Swiftness is a great button, but this isn’t enough cooldown reduction to make it competitive.

Unstoppable Growth is as big a healing monster as it’s existence as a Potency Conduit will allow. Wild Growth is a fantastic spell in Shadowlands due to Soul of the Forest’s revival and Convoke the Spirits offering up 2-3 free casts every couple of minutes. Increasing it’s power through Unstoppable Growth is a noticeable healing increase and you’re likely to keep this permanently slotted in raid content. It’s slightly weaker in Mythic+ but still very good.

Conflux is a little weaker than it might appear since it only buffs Convoke’s healing while you’re channeling it but a lot of the effective healing actually takes place later than that (through the HoTs it bestows). You’re likely to see this settle in as our second strongest potency conduit but it’s still a permanent fixture in your tree.

Barkskin is definitely very very good but this isn’t a lot of cooldown reduction (offering only a 12s reduction at max rank). Still good, but unless you have a specific mechanic in mind that you need Bark up for, this probably ranks second among our defensives.

This is technically a Guardian Endurance Conduit but it does work for Resto too, with the Frenzied Regeneration HoT even applying when you’re in caster form. There are a few bugs like it not applying the standard mastery HoT we expect from Frenzied Regen but this is still extremely nice. Consider it a near 25% heal when you’re in trouble. Absolutely top tier.

Notably good for surviving very large hits that might one shot you otherwise. Keep it in your back pocket for those but it’s not great for regular use.

Regrowth casts on yourself are quite rare given how sturdy we are, and the frenzied regen increase is really only useful when paired with Well-Honed Instincts above. This is a bit of a dud at current tuning.

This is kind of a cute reference to a BFA azerite trait. You have a lot of choice when it comes to Finesse Conduits since they’re more situation-specific than Endurance and especially Potency. The well fed buff is actually the biggest food buff in the game so this isn’t a bad trait to slot in if you can’t find a use for the others. Battle res someone who died in the last wipe to supercharge them for the next.

Front of the Pack

Stampeding Roar is solid raid utility and a duration increase is frequently useful. Consider this a frontrunner for most raid fights.

Born of the Wilds

This is actually very appetizing for adding damage through it’s cooldown reduction on Heart of the Wild. At higher ranks (higher than is available in the first tier) you’ll be able to use it to align every other Convoke the Spirits perfectly with Heart of the Wild. More useful in Mythic+ than in raid, but if you end up with two Finesse slots then you could definitely combine this with Front of the Pack above.

This is fine. It’s not particularly useful in raid or Mythic+ given our already superb mobility so you’re probably unlikely to use it much.

Have a question not answered? Drop it in the comments and I’ll make sure you get an answer.