Healing trinkets for most of Shadowlands were rather dull stat sticks. The upside was that we always had good trinkets available like Unbound Changeling, Soulletting Ruby, Elegy of the Eternals and many more. In Dragonflight they’ve leaned way harder into weird and (hopefully) wonderful designs. There’s a Whelp that you teach, a Tome that gives you intellect but actually lowers your crit, and a fancy new mana trinket that also deals damage if you’re high on mana. Designs like these in the past have often been quite weak, let’s see what the current state of them is.

There are a huge amount of trinkets when entering an expansion so we’ll split this article into three parts. Two on dungeon trinkets and one on raid trinkets. To compare specific item levels, you can use Questionably Epic Live when the expansion opens. Part 2 of the Dungeon Trinket Preview is now out and can be found here.

All calculations are on the 372 ilvl Mythic versions of the trinkets. This is the highest we’ll have access to for the first few weeks of the expansion. Some of the trinkets scale with your secondary stats and might vary slightly depending on your loadout but this doesn’t tend to be major. Blizzard tend to do a lot of trinket tuning in the leadup to release but I’ll keep note of any changes.

Our demo character (henceforth known as Steve) has the following stats: 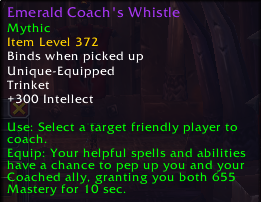 Emerald Coach’s Whistle is an on-budget stat stick divided into two. Generally giving stats to a DPS is quite a nice benefit, but you’re giving up quite a bit of personal power here. You’re likely to find it quite useful if you pick it up in the first few weeks, but you’ll ultimately replace this with something stronger.

It also both that you like Mastery and that you have a partner that likes Mastery. Quite easy to find in raid, but not guaranteed in Mythic+ or for specs with poor personal mastery scaling like Resto Shaman. 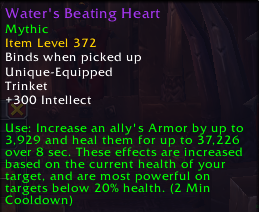 Verdict: Paltry heal over time effect on a long cooldown

Water’s Beating Heart is by far one of the weakest trinkets currently available. The heal over time effect is small and on a horrendously long cooldown. It wastes some of it’s budget on armor which reduces it’s applications further since such a buff is only useful on tanks. There are no scenarios where I’d recommend using this. 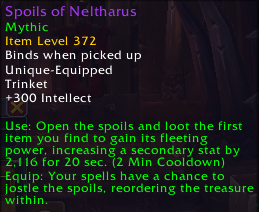 It’s a real shame that Neltharus isn’t a Season 1 Mythic+ dungeon since this is a fantastic trinket that’ll see limited play purely because of it’s low 372 max item level. For now you can consider it a lock in for best in slot trinket before the raid opens and look out for it when it comes back as a Mythic+ item later in the expansion. 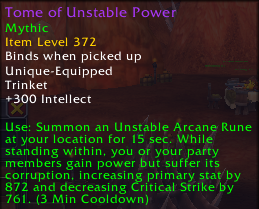 Yes it’s that small and hard to see. Good luck! 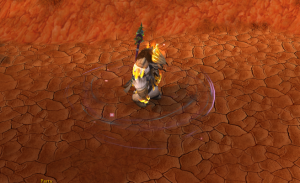 Verdict: Back to the drawing board

They tend to make one of these trinkets every expansion and they are near unusable because they insist on giving them a tiny radius. That’s difficult enough to play for a trinket that only buffs yourself, but chronic for one that you want to stack four other allies in. This one also isn’t very good numerically and there are other on-use intellect trinkets that just do the same thing in a much better format. 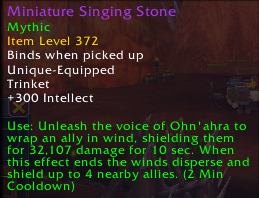 This is a solid choice early on in the tier. It’ll fall behind when we can access the very powerful raid trinkets and as our throughput rises but it’ll hold up for quite a while. Solidly tuned trinket. Might see high level dungeon play to counter dangerous one shots.

We’ll cover the rest in the next few days!

2 responses to “Dragonflight Dungeon Trinkets I”