One of Shadowlands major features is the addition of craftable legendaries using mats pulled from the depths of Torghast. This time around you only get to wear one at a time (plus your covenant legendary through Unity). We discuss each in some detail below. In addition to the Druid legendaries listed we can pick one of several “neutral” legendaries that are available to all classes. These aren’t worth wearing for PVE content currently.

I’d also recommend furthering your 9.2 knowledge with the full FAQ which includes a full breakdown of how legendaries interact with the new Domination Socket system.

What do I build first?

Your raid legendary choice is very straightforward, with Vision of Unending Growth pairing well with the Celestial Spirits effect you’ll get through Unity. Verdant Infusion has a niche too, but doesn’t see that much play.

Mythic+ is a much more complex choice with many legendaries being situationally useful. You will be best off reading the Catweaving guide for a more in depth breakdown.

Legendaries must be crafted in specific slots to avoid overlapping with our Domination Socket slots. More information below.

This section goes into vast detail about every legendary. If you’re just looking to make a decision then the section above should suffice. This was written during beta and may not be current information. For that see the above recommendations.

Oath of the Elder Druid 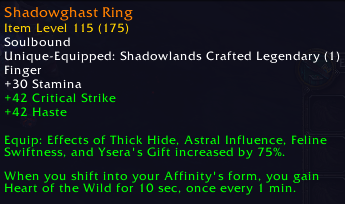 In raid we’re looking at +4.5% damage reduction from Guardian Affinity and about 2-2.5% healing from the Ysera’s Gift increase. It also turns Bear Form into an even chunkier defensive once per minute through Heart of the Wilds 20% stamina increase. An all-inclusive package, but it’s an incredibly defensive one too on a spec already loaded with survivability. The throughput portion also scales poorly with raid burst damage since Ysera’s Gift does a very consistent amount of healing. Ultimately this isn’t good for throughput and you’re unlikely to value it as part of your top three.

In Mythic+ you’ll be running Feral Affinity or Balance Affinity instead. The Ysera’s boost is mediocre to poor here, and the movement speed or range increases are very minor boons. We are more interested in the Heart of the Wild portion. As a reminder, Feral Affinity Heart of the Wild gives us a 30% damage increase (plus a few bonus combo points) while Balance Affinity offers a 30% damage increase and instant Starsurges. If we can make frequent use of the bonus as it comes off cooldown we’re looking at a 5-6% DPS increase. I think we’ll find we can get better elsewhere.

Overall this is a very “jack of all trades” legendary and like it’s Legion counterpart it’s unlikely to be best in slot anywhere. Merely “capable” whatever you’re doing.

Sometimes I wonder if Blizzard regret adding this legendary in the first place. It’s initial iteration gave you two lifeblooms and buffed your bloom healing on each by 200%. They’ve nerfed it four times (and Photosynthesis itself once) since then so where does it leave us? A 10% nerf to all lifebloom healing is a harsh penalty and I honestly have a strong dislike for a legendary item reducing the power of a core resto spell – regardless of balance. It makes equipping a legendary feel more like doing your accounting homework than the big exciting moment that it should be. Having to consider both sides of a ledger can be good design in general but I don’t think it suits the legendary system. Let’s see how the numbers shake out:

Numerically still ok, but we’re looking at a rather best case scenario. If you don’t use all of your mana (losing Lifeblooms efficiency over rejuv), miss Clearcasts (ridiculously common), or fail to keep both Lifeblooms up then it’s value drops off the face of the earth.  So the once great Dark Titans Lesson joins it’s Legion equivalent in the middle of the pack. This now sees stiff competition from the buffed Verdant Infusion and you’re unlikely to use it much, though it’s still playable if you crafted it in 9.0.2 and don’t have better. 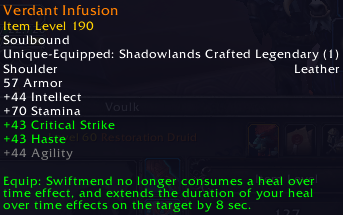 This was an incredibly powerful legendary, mostly owing to its ability to extend Cenarion Ward twice. They nerfed it down to 6, then buffed it back to 8, now they’ve buffed it again back to 10. We like this a lot at 10. It lets you once again comfortably extend Cenarion Ward twice which is a lot of extra healing. It still sees tough competition in raid from Vision of Unending Growth (think of it as niche and usable rather than bad) but is a dominant choice in dungeons. 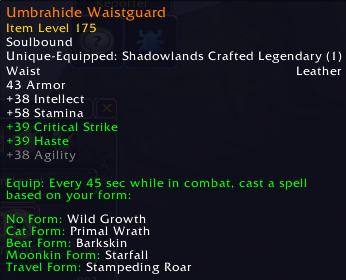 A little boring and a little uncontrollable but fine on paper. Your decision making here is which form to be in when your free spell pops and you’ll have a weak aura to aid your timing. In raid it will be a rather straightforward decision most of the time. Stampeding Roar is fantastic but travel form is only rarely available; free DPS from Primal Wrath / Starfall is fine if non-burst AoE is good for a fight or when nothing else is going on but Wild Growth is going to be our bread and butter.

Weaker than our single target choices in net throughput and behind Memory of the Mother Tree in sustained healing. The raw strength of Wild Growth keeps this in rough contention but it’s unlikely to see play for now.

In Mythic+ this item is likely to be evaluated primarily by its DPS value. A free Primal Wrath or Starfall is much more powerful in a dungeon environment and you’re much more likely to be outside where Stampeding Roar adds further powerful utility. We don’t have any proper DPS calculations yet, but should soon. 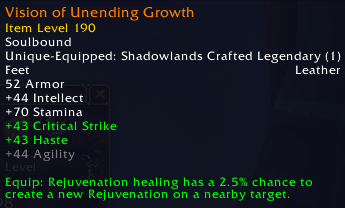 Buffs to this item, in combination with nerfs to the previous frontrunners, has pushed it straight into top tier (for raid). A similar effect was brokenly strong in legion but we had far more support to our Rejuvenations back then (some HoTs were as long as 23+ seconds, whereas now they’re 15). Without those it’s just good, rather than overpowered. Rejuv Spreader is also incredibly easy to use, which means you are likely to get incredibly consistent healing from it regardless of how you play whereas the legendaries with more of a skill aspect will have greater variation.

Remember that Mother Tree gives us about 4 free rejuvenations per minute. Unending Growth (Rejuv spreader) needs to beat that, which it will easily do if you’re around ~18-20 rejuv casts per minute with a moderate amount of haste. There is no longer a haste breakpoint due to Blizzard using a prorated proc rate on partial ticks.

The % increase represents the net increase to your total rejuvenation healing. The above is now slightly out of date due to the newly discovered prorated ticks.

This won’t see any play in Mythic+. You just have too few average rejuvs out at any given moment. Put your Germination away. It isn’t happening.

Circle of Life and Death 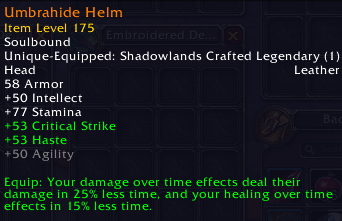 In raid this is likely to be a non-starter for the entire expansion unless we see some truly bizarre fights. It weakens your cooldown windows, reduces the value of mastery and doesn’t offer any real power in exchange.

In Mythic+ on the other hand this should prove powerful. Efficiency is of lower value, Rake / Sunfire / Moonfire make up a large portion of our damage and a 25% increase to their damage is significant. It is not a good healing legendary, and Verdant Infusion is so powerful that you might find you skip this even on high keys.

Memory of the Mother Tree

Free HoTs, but in a bad way

Mother Tree is a decent all-rounder that ultimately just gets beaten out by legendaries that are stronger for each specific purpose. It’s higher on RNG, and easier to misplay than Vision of Unending Growth, and while the average throughput is solid it is still behind.

In Mythic+ it does good healing but is unable to match the dominant Verdant Infusion.