Note: This was a preview article, but has been updated for the current patch. Some references will still read as originally written, but information is accurate.

It’s time. The Shadowlands are here. Grab your 34 slot bag, delete the last corrupted items from your inventory, pick a levelling spec and join us. The following FAQ will focus on quick, accurate answers. There’s more depth to a lot of these questions, and more paths you can take if you aren’t looking to min max. If you’re set on Necrolord, or think Theotar is your soulbind no matter what then the tools will still have full support for you but this article will mostly focus on what is optimal. If you’re returning to the game or spec I’d suggest starting with the 9.0 FAQ which covers the changes we received in the prepatch.

Night Fae is a dominant covenant choice for Resto Druid. The gap for us is larger than any other healing spec and you’re looking at a 3-4% throughput loss if you pick Venthyr instead. More for Necrolord or Kyrian.

Dreamweaver is currently shaping up to be our strongest Soulbind tree owing mostly to the strength of Empowered Chrysalis, which is on a row of the tree that doesn’t usually get big throughput increases. Soulbinds are still being heavily iterated on and our pick here could easily change by the time Mythic raids launch. Stay tuned. QE Live also has a full covenants module that’ll tell you how much throughput to expect from your choices. It will go live with the expansion. 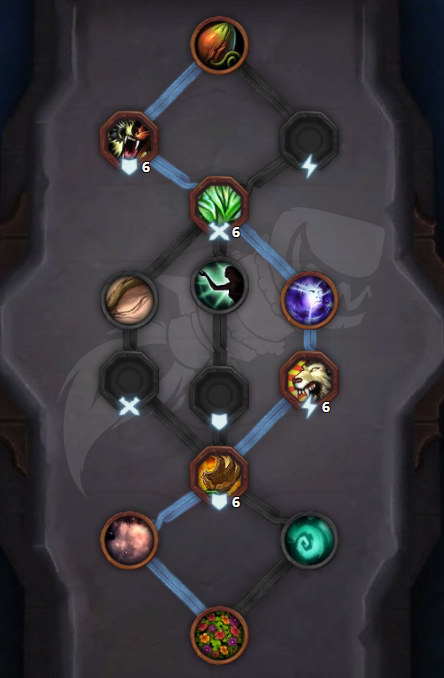 There is a full, up to date Conduits guide here. QE Live also has a full Conduit section. The quick version:

The other potency conduits are not viable at this time and in some cases are comparable to not wearing a potency at all.

Well-Honed Instincts is a clear number one. Tough as Bark likely slots into your second Endurance slot where applicable.

You have a lot of flexibility here but Front of the Pack is an easy, effective raid choice.

There is a full guide to legendaries here. For raid you’ll be crafting Vision of Unending Growth first, known as the “Rejuv Spreader”. The pattern drops from Torghast and you should have it very early on in the expansion. Don’t stress if you’re not ready to craft your legendary in the first 2 weeks. The better play is going to be to wait until you get the right pattern, and for any late tuning to conclude.

If you’re more interested in Mythic+ than raid then Verdant Infusion has become a dominant choice following buffs in 9.0.5. For pure damage you might also consider Circle of Life and Death, but you’re usually better off grabbing the healing focused legendary first.

If you both raid and Mythic+ then I’d recommend Verdant Infusion first, and then Vision of Unending Growth second. Verdant Infusion will perform acceptably in raid, whereas Vision is near unusable in Mythic+ so it makes sense to craft in that order.

Item Level is much more important than it was at the end of BFA and in most cases you will wear your highest item level gear outside of trinkets. Individual items can be compared in Questionably Epic Live. As a very very general stat priority you should look at something like

Once you’re comfortable with the dungeons you’ll drop mastery for more offensive stats. You can comfortably gem for Haste since no intellect gems are available.