Generally I like to put together separate FAQ posts for each healing spec but given there are no class changes happening in season 4 and limited new content it made sense to put them all together in one. We’ll go over what you need to know about your legendaries, where to spend your Dinars and what cool stuff is in the returning dungeons.

Special effect items that of high value are actually pretty rare. This season we’re blessed with the strongest three we’ve seen in the last few years and we’ll have them all at once. 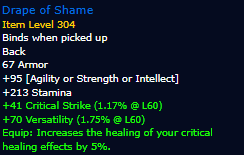 Drape of Shame increases crit healing by 5% while worn (it technically increases your crit modifier to 2.05 from 2.0). At 25-30% crit you’re looking at around a 1% healing increase from the effect. It notably still has a full allotment of secondary stats on it so you will want to wear this in all scenarios regardless of which spec you play.

Usable by: All (but not optimal for Priest) 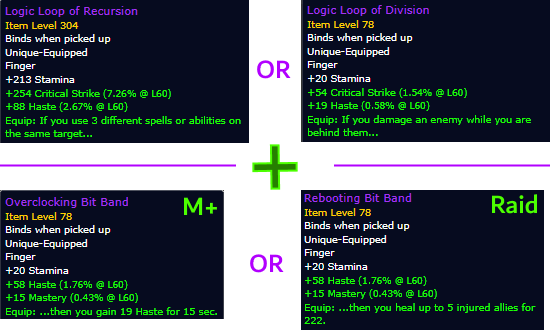 The Mechagon Ring combos consist of four different “If” rings and four different “Then” rings. You pair an “if” with a “then” and get the effect whenever you fulfill it’s condition. These are incredibly powerful and are must-haves if you’re looking to maximize your non-priest character. They are on a short 15 second cooldown.

Mythic+: Pair either the healing effect (Rebooting Bit Band) or haste effect (Overclocking Bit Band) with Logic Loop of Division. Higher keys will benefit more from the DPS gain of Overclocking but when starting out either are powerful options.

The Priest Exception: Unfortunately if you are a Priest then the Mechagon ring set competes directly with the Soulwarped Seal of Wrynn which is stronger. 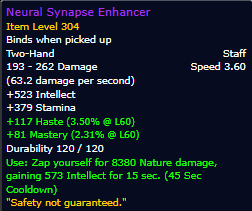 An on-use intellect buff that trades significant base intellect for a big proc. This is an extremely good weapon for Venthyr Disc Priests and almost nobody else. Druids and Shamans are better off sticking with Antumbra. It’s an upgrade for Disc Priests if ~half of your healing or more is within your ramp windows. You can use QE Live to compare with what you own but you might find it’s a choice you make on a fight by fight basis.

Warlords of Draenor Mythic+ items use a different type of itemization since they were released in a time where rings and necks had intellect as well as secondary stats. You might initially think these would be quite good given how strong intellect is for all healing specs. Unfortunately they give up a significant amount of secondary stats for it and aren’t worth wearing in any scenario.

What are Dinars and where do we spend them?

Season 4 will offer a new type of gearing token called the Puzzling Cartel Dinar. You can trade these for normal versions of trinkets, weapons and special effect items from the three raids active this season. You can then later upgrade them (or any other raid drop you get) to heroic or mythic difficulty by using a second type of token you get for clearing 10 bosses on that difficulty across the three raids. It appears that your first Dinar won’t be acquirable until week 3 of the patch (since it requires 30 fated boss kills) which means the specific item you’ll want to buy might change based on what loot you get early (you might even get a few items on this list). As such don’t take it as definitive.

All you need to know about Legendaries

Legendaries are staying at 291 item level in Season 4 and there won’t be a way to upgrade them further. This means that the technically optimal slot for them will change from a high budget item to a low budget item. This is fairly low impact swap and if your legendary isn’t currently on a cape or ring slot then you shouldn’t feel like you must move it.

The rough new slot order will be Bracers > Neck > Belt > Boots but it will depend on what high ilvl slots are available to your spec and which slots your non-unity legendary can actually fit into.